Inetsat, a longtime customer of DekTec cards, offers a cloud-based playout platform that can serve as an alternative for distributing TV channels via satellite. The cloud is used for media distribution, in combination with video servers that play out TV channels at central or remote facilities.

Major broadcasters and service providers use Inetsat’s product for primary play-out, disaster recovery, ad insertion and localization. The video servers support all resolutions from SD to UHD, and play out over SDI (uncompressed) or TS (compressed) over ASI or IP.

Pablo Salomon, Inetsat’s CEO, comments: "We offer the most flexible playout platform in the market. The flexibility of the DekTec cards is an excellent match to our system philosophy."

"With the advent of the new Colorado line of ASI/SDI combo cards, Inetsat has now deployed the DTA-2172 and DTA-2174B. The new cards offer a small footprint, higher density, and lower cost solution, allowing Inetsat to offer more flexible and cost-effective solutions to networks around the world" says Stephane Billat, GM of DekTec America Inc. "The Inetsat crew is very professional and very pleasant to work with. We are proud to have Inetsat as one of our happy and growing customers."

See our news article for a brief history of these 20 years.

DekTec's real-time SDI analyzer, SdEye, has been enhanced with triggering on and decoding of SCTE-104 ad-insertion messages. These messages are located in the VANC space of an SDI stream. By definition, they last only a single frame and are somewhat difficult to capture.

Ad-insertion messages must be captured before they can be analyzed. You can command SdEye to freeze when an SCTE-104 message is detected, and capture a few SDI frames around the frame containing the message. This feature allows you to examine the exact timing relation between the ad-insertion message and the video.

Showing the contents of on an SCTE-104 message- Click to enlarge.

The new SdEye version is available for download for any user with a current license.

Broadcasters use SCTE-104 messages in SDI streams to indicate where in the stream advertisements can start and end, and which ads to insert. Video encoders translate SCTE-104 "requests" in SDI to SCTE-35 messages in an MPEG-2 transport stream. A downstream splicer interprets the SCTE-35 messages and splices the video at the specified times for smooth ad insertion.

StreamXpert now decodes MPEG-H audio and shows associated metadata in a concise way. Broadcasters can use it for confidence monitoring - checking that the audio actually decodes and that all parameters are configured properly. Equipment manufacturers can inspect and verify the MPEG-H audio stream and metadata in their product's output.

MPEG-H "3D" audio is a next-generation audio-coding standard that is a further development of AAC audio and includes new technologies. It has been developed by MPEG and Fraunhofer IIS to deliver customizable audio for any device, from theater to mobile phone. By sending separate audio channels to the end device and mixing the streams there, the best audio experience can be achieved for every situation. The user can select individual streams such as language or extra audio commentary, and even the listening position can be adjusted. The broadcaster determines which options the listener can adjust.

The new audio standard is gaining momentum. It has been on air since 2017 on TV networks in South Korea under ATSC 3.0, and it has been selected for various new broadcast channels to be launched, amongst others in China and Brazil.

A key technique in MPEG-H is the use of 'audio objects', each of which has a specific position in space. The audio objects are rendered for the speaker layout used, producing a realistic 3D sound field. MPEG-H enables transmission of 7.1 audio with several audio objects in the same bandwidth as todays 5.1 surround broadcasts. By separating commentary language from music tracks and including those as separate audio objects, better compression can be achieved while at the same time giving the user more control over position and presence of language and commentary tracks.

StreamXpert can analyze MPEG-H audio in OTT, ATSC 3.0 and transport streams. The analyzer provides an in-depth view of the MPEG-H stream, as illustrated by the screenshots below.

The proof of the pudding is in the eating, so in addition to showing metadata, StreamXpert can also decode MPEG-H audio. Audio decoding parameters can be configured in a decoding user interface that is dynamically built from the Audio Scene Info metadata. When the audio scene changes, the user interface is updated accordingly.

With the addition of MPEG-H audio decoding and showing metadata, StreamXpert keeps up with the latest broadcast standards. The new MPEG-H functionality is included in the standard StreamXpert v2.13 package and freely available to those who have purchased their StreamXpert license or latest maintenance extension less than 12 months ago.

DekTec releases its highest-density interfacing product to date. The DTA-2178 has 8 bidirectional 12G-SDI/ASI ports, plus genlock, on a low-profile PCIe card to fit 1RU PCs for applications where size and power do matter. The card uses micro-BNC connectors that lock like standard BNC. The DTA-2178 is attractively priced at less than €125 per SDI/ASI port.

All 8 ports can be independently configured from software. Port 1 and 5 are capable of full 12G, allowing reception or play out of two 4K streams over single link 12G-SDI or quad-link 3G-SDI. Each port support 12G-SDI input by downconverting to 3G, allowing monitoring of up to 8x 4K! 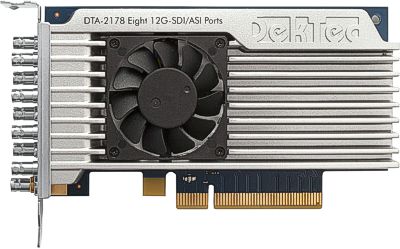 The DTA-2178 supports all transmission modes including level A and B for 3G-SDI, and 2SI/quadrant mode for 4K signals. For every input, all lines and all samples are passed to the CPU without modification or omission. This allows the developer to recover or to stream any type of audio, video and ancillary data without compromise. These features make the DTA-2178 very attractive to developers of video production, distribution, and contribution equipment.

A block diagram showing the default firmware variant loaded on the DTA-2178 is shown in the figure below. This firmware features eight independent ports, each configurable to operate as ASI or SDI input or output. Each port can also act as a double-buffered copy of another port to make multiple copies of the same output signal. Ports configured as output can be synchronized to the bi-/tri-level genlock input port.

The DTA-2178 completes the Colorado line, DekTec's new range of SDI/ASI interface cards for PC. The user has a choice of 2-, 4- or 8-port cards, all controlled from the same driver and SDK. DekTec's popular software applications, StreamXpress, StreamXpert, and SdEye, are supported.

Each card is offered at a very competitive list price. Even better prices are available if you are going to integrate these cards in quantity in your product. Please contact DekTec for a quotation with our inviting terms.

We have released the 3rd generation of our high-density receiver card for monitoring an entire terrestrial or cable network with a single PCIe multi-receiver card. The new DTA-2139C houses twelve (!) receivers to capture any mix of cable (DVB-C, QAM-B/C) and terrestrial (ATSC 3.0, ATSC 1.0 (8VSB), DVB-T, DVB-T2, ISDB-T) signals.

All services in the twelve received transport streams / DASH streams are simultaneously available. You can use it to monitor your network in real time, with DekTec's Xpect Mosaic (except ATSC 3.0), with a 3rd-party solution or with your own compliancy-checking application. 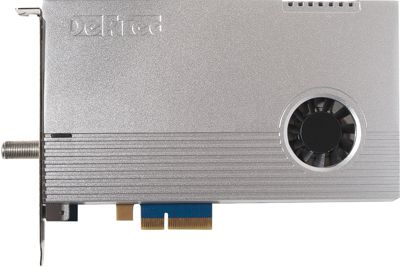 DTA-2139C - Twelve cable/terrestrial receivers, with ATSC 3.0, on one PCIe card.

With the latest hardware update, all all transport streams and/or Dash streams in a cable or terrestrial network can be monitored, including a mix of ATSC 3.0 and legacy ATSC 1.0 (8VSB) signals. Streams can be monitored for conformity, they can be recorded (compliance recording) or a mix of services can be decoded and placed in a mosaic.

For ATSC 3.0, each receiver is able to demodulate 4 PLPs (Physical Layer Pipes) simultaneously. The same channel can be demodulated by multiple tuners if more PLPs are present.

Since ATSC 3.0 will be introduced later in many regions, along with existing ATSC 1.0 (8VSB) services, the DTA-2139C allows all services to be received and transcoded to IP, or to multiplex and modulate received services again on a local cable network. As each demodulator is independent, the user can start monitoring or receiving legacy ATSC 1.0 signals and progress to receiving ATSC 3.0 when such channels are added or converted.

The DTA-2139C is the successor of the DTA-2139B. Several improvements have been made using state-of-the-art technology and the latest generation tuner and demodulator chips. Supporting all major cable and terrestrial standards, it makes the DTA-2139C a universal, inexpensive, high-density PCIe receiver.

For developers, the product comes with our free and field-proven SDK (DTAPI). Applications have access to the complete transport stream or IP stream (ATSC 3.0) from each of the twelve receivers. Additionally, each receiver provides lock status, RF level, MER and bit error rate.

With the DTA-2174B, DekTec’s popular DTA-2174 quad 3G-SDI card has an impressive successor. Its attractive price (€725 list!), lower latency and 12G-SDI support on port 1, make this card even more attractive for developers of video production and distribution equipment than its predecessor. All ports support DVB-ASI, allowing mixed compressed/uncompressed applications such as a 4K encoder with 12G-SDI input and ASI output, or a 4K decoder with ASI input and 12G-SDI output.

A block diagram showing the standard firmware loaded on the DTA-2174B is shown in the figure below. This firmware features four independent ports, each configurable to operate as ASI or SD/HD/3G-SDI input or output. Each port can also act as a double-buffered copy of another port to make multiple copies of the same output signal. Ports configured as output can be synchronized to the bi-/tri-level genlock input port.

A second firmware variant is intended for applications that require a 4K input or output in the form of a 4x 3G-SDI quad-link or a single-link 12G-SDI interface.

A third firmware variant (not shown here) targets 4K encoding/decoding applications with uncompressed input or output over ASI or a scaled down copy of the 4K content for monitoring purposes.

The DTA-2174B is the second member of DekTec's new range of SDI/ASI interface adapters for PCIe. These cards provide different numbers of bidirectional ports, at very competitive list prices. Even better prices are available if you are going to integrate these cards in your product. Please contact DekTec for a quotation with our inviting terms.